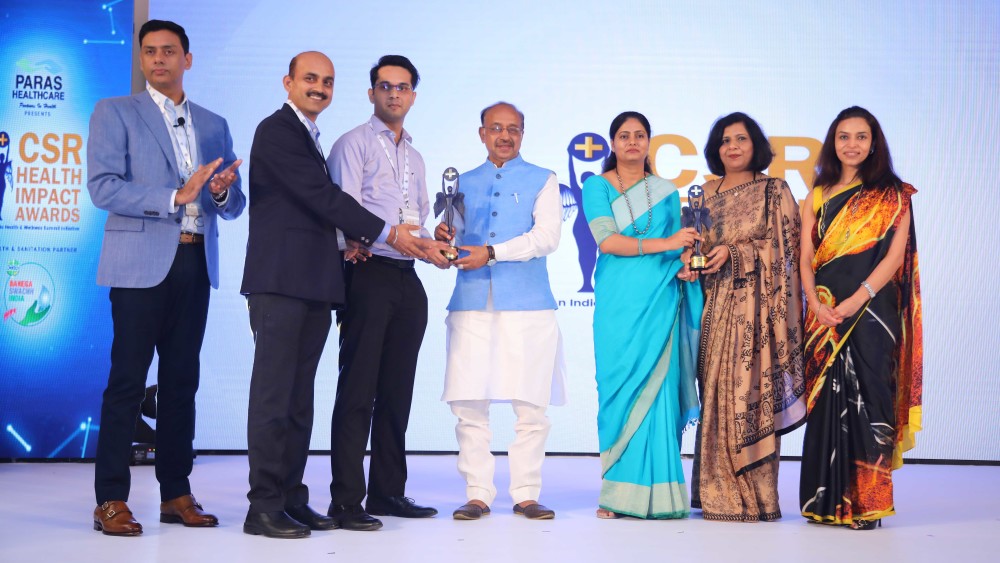 The highly sought-after initiative of India Health & Wellness Summit, was held in the majestic hall of Hotel Hayat Regency in the national capital with Shri Vijay Goel, Minister of State for Parliamentary Affairs, Government of India and Ms Anupriya Patel, Minister of State for Health and Family Welfare gracing the event as Chief Guest and Guest of Honour respectively.

Among the key awardees included Apollo Tyres, Aditya Birla Capital, Indraprastha Gas Ltd., Essilor, Akshay Patra, and Vedanta Ltd were amongst the top awardees in the exclusive event which was graced by the none other than

Shri Suresh Prabhu, Union Minister of Commerce and Industry, made his presence felt by sharing a video message congratulating the organizers and the award winners for the initiative.

In his address to the audience, Chief Guest Shri Vijay Goel, Minister of State for Parliamentary Affairs, said “Health in India is most important in villages and rural areas which are lacking doctors and hospitals. Also, there is a need to move towards holistic healthcare through Yoga and Ayurveda through indigenous sciences. It is important for organizations to own-up the responsibility towards health, sanitation, and environment and to utilize CSR funds in the most efficient, transparent, and effective manner.”

Congratulating the organizers for the initiative, he added “Awards and recognition should spur even more corporate citizenship and the discharge of social responsibilities.”

While Ms. Anupirya Patel congratulated the organizers for creating this initiative and to all the winners and participants, she inspired organizations to continue with the good work irrespective of whether one is awarded or not.

“Various enterprises have been contributing to the society even before the CSR funding initiatives came up. But, the tendency to do good must continue,” she said.

Highlighting a series of government initiatives impacting India’s health scenario for the better, Ms Anupriya Patel added “As announced by our Prime Minister from the Red Fort, our Jan Aarogya Abhiyan is all set to be rolled out in September, which seeks to cater to each and every aspect of healthcare. The scheme is enabling access to primary, secondary and tertiary healthcare is something which has never happened in this scale ever before. The scheme will not only ensure people’s health but also improve existing community health centers to healthcare and wellness centers.” She added.

Earlier they (primary healthcare centres) were just seen as points of maternity care and delivery, but now they will turned into facilities offering a complete package of 12 different services, that will include ENT, dental and geriatric care, management of communicable disease such as as dengue and malaria,” she said.

Putting in the context of Delhi’s worsening pollution levels and health scenario, Mr. Kamal Narayan Omer, Co-Founder, India  Health and Wellness Summit, said, ”When we are facing such a situation in a bustling metropolis such as Delhi or Mumbai, you can well imagine what the fate of people in far-flung places of our country would be like. The agony of this truth led us to start the advocacy for good air, good water, good food and good medicine, 5 years ago in the shape of the India Health & Wellness Summit. We also realized that our corporates and industry leaders are quite willing and able to play a very important role in achieving this dream of a healthier India because of their extensive reach and capacities as their ability to expend a larger corpus of funds for inclusive healthcare. Small initiatives will encourage them to come forward.  A healthy individual is the most important unit of a prosperous family, a growing society, and a strong nation.”

Mr. Narayan also highlighted the extensive work that his organization which works as the top Public Relations (PR) and Advocacy agency for Health industry is doing towards increasing awareness among the masses about various dieases and help them take preventive and curative actions on time.

The CSR Health Impact Awards initiative also became the chosen platform for the leading tertiary care provider, Paras Healthcare, to launch their one of a kind initiative Paras Sarthi, a CSR-focused health initiative which aims to collaborate with corporate and PSUs to make tertiary care accessible to those who cannot afford it.

“A lot has been done in healthcare CSR for advocacy and awareness but the real impact is needed in tertiary care. We need efforts for awareness, diagnosis and treatment to work together to provide a 360 degree approach to CSR Healthcare. Paras Sarthi is a platform to provide credible and impactful healthcare CSR. We have witnessed challenges and have made healthcare a reality in Haryana and Bihar. It is time through Paras Sarthi we achieve health for all. We are looking at corporate to associate with Paras Sarthi to achieve their health CSR responsibility,” said Dr. Dharminder Nagar, MD, Paras Healthcare.

The awards evening also included a knowledge session with experts from industry joining together for a panel discussion which deliberated on how CSR efforts can contribute towards better health. Dr. Sanjiv Kumar Director IIHMR Delhi, Mr. P Balaji -Vodafone Director-External Affairs and CSR, Mr. Ravi Bhatnagar- Director External Affairs and Partnerships, for Reckitt Benckiser, and Mr. Ajoy Khandheria, Founder Gramin Healthcare participated in the panel discussion which was moderated by Dr. Bobby John, Co-Founder India Health and Wellness Summit.  The panel discussed upon how positive atmosphere is instrumental in inspiring good work in the sphere of health.

Awarding 26 organizations over 12 categories divided in 3 groups, the initiative recognized the good work done in the sphere of health by the industry utilizing their CSR funds. Some of the initiatives that were recognized were driven by the likes of Max Bupa Health Insurance, Mahindra Finance, Johnson & Johnson, Religare, Goodyear India Limited, Gujarat Road Infrastructure Company Limited, Jagran Pehel and Gramin Health Care.

Making it a level playing field, the award categories were divided in three groups Gold, Silver, and Bronze which invited companies registering a turnover of more than Rs 1000 crores, between 250  and 1000 crores, and less than Rs 250 crores respectively to nominate their CSR Health initiatives.

The CSR Health Impact Awards — an initiative of India Health & Wellness Summit — is constituted to inspire organizations to drive a nationwide CSR–based health movement and to appeal to the corporate conscience of others to participate at grander scale and make the movement stronger.

The awards recognizes those organizations who have imbibed responsible business practices in their core philosophy by initiating the most impactful health CSR ventures that have driven change on the ground and have impacted millions of lives.

Over the last 3 months, the CSR Health Impact Awards saw submissions flooding in with over 200 applications being filed for the awards. After the preliminary review, the shortlisted entries were closely deliberated upon by the esteemed jury who are experts from various fields. After intense analysis on sustainability and scalability of the brands, and transparent selection through a jury-driven process, the prestigious awards were given out today to the most deserving candidates.